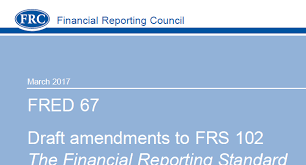 In this blog, we look at the proposed changes in FRED 67 on financial instruments, intangible assets and small entity directors’ loans.

These changes were published in FRED 67 (by the Financial Reporting Council in March 2017) which the FRC propose to make effective from 1 January 2019.

For more on FRS 102, the proposed changes in FRED 67, and other topics come to our upcoming CPD courses in the Talbot Hotel Stillorgan County Dublin.

Section 11 of FRS 102 ‘Basic Financial Instruments’, sets out a detailed list of rules for classifying debt instruments as ‘basic’.

If any of these are breached, the instrument is complex (in the language of the standard ‘non-basic’) and must be accounted for under Section 12, Other Financial Instruments Issues, at fair value. These rules do not change in the latest proposals, but the exposure draft does add a new principles-based definition of a debt instrument.

The idea is that more instruments should meet the ‘basic’ definition in future.

Even if an instrument breaches one or more of the rules, it could still be ‘basic’ as long as it falls within that definition.

The idea is that more instruments should meet the ‘basic’ definition in future and ‘non-basic’ instruments will end up being, typically, those where there is some exposure to something unusual or unrelated. It also means, though, that a greater degree of judgement will be needed when assessing financial instrument classification.

Intangible assets in a business combination are currently separated out from goodwill if they either arise from legal or contractual rights, or if they are separable. This was a change from old UK GAAP, which required both of these criteria to be met. In FRED 67, the FRC is reverting to the old GAAP approach, although it does allow an alternative accounting policy choice, where all intangibles can be separated out as long as they are reliably measurable and have a probable chance of future economic benefits.

This seems to offer a reasonable amount of flexibility, but it is an ‘all or nothing’ approach: either all intangibles are split out, all the time, an approach more similar to IFRS, or they are split out relatively rarely, as under old UK GAAP. If this amendment is approved, the decision as to which policy to apply will depend not only on the accounting but also other areas, especially the tax implications.

The accounting required for intragroup and other related party loans has been a source of difficulty since FRS 102 was first issued.

Currently, where a loan is made on an non-market basis, it is necessary to identify an equivalent market interest rate and use that to discount the cash flows to present value.  However, the FRC received feedback raising concerns about how practical it is to obtain a market rate, particularly for small entities that would not otherwise be able to access funding. There is also a question as to how relevant the accounting treatment is, especially for owner-managed businesses.

The exposure draft proposes that small entities are not required to find a market rate of interest where they have borrowings received from director shareholders or close family of the director shareholders i.e. credit loans. Instead they can just use the transaction price. This exemption only extends to directors who are ‘natural persons’, so loans with corporate directors would not qualify for the exemption. It is our understanding that this relief will also be allowed to ‘small’ entities that choose not to use Section 1A of FRS 102, as long as they qualify as ‘small’.

Reacting to early feedback received the Financial Reporting Council have already published an interim relief measure for directors from 8 May 2017. The measure announced applies to credit loans only. The FRC has clarified that the interim measure will not apply to loans from small companies to their directors/shareholders i.e. debit loans.

Readers may want to send feedback to the FRC, before the deadline of 30 June 2017, asking for this relief to be extended to debit loans i.e. loans from the company to director/shareholders, as they are just as common as debit loans.

Any change in accounting policy resulting from a change in the requirements of a Financial Reporting Standard (FRS) needs to be accounted for in accordance with the transitional provisions, if any, specified in that amendment. Where there are no transitional provisions, any changes in accounting policy need to be applied fully retrospectively (i.e. from the beginning of the comparative period), to the extent practicable.

FRED 67 contains a couple of transitional provisions relating to intangible assets previously separated out in a business combination and investment property, which is let out to another group entity. The remaining changes seem to need to be applied fully retrospectively. The FRC may amend this when it issues the final set of amendments, but this is not certain.

The FRC aims to issue the amendments in final form by late 2017. The plan is that the amendments will apply for periods beginning on or after 1 January 2019, but early adoption will be available once they are finalised, so if the simplifications suit, it could be possible to adopt them for 2017 year ends. If any amendments are adopted early, all amendments must be adopted early.

In FRED 67, the focus has clearly been on making FRS 102 more straightforward and easier to apply in practice. The next stage of the triennial review will focus more on alignment with IFRS and particularly on implementing some of the big changes that are currently affecting IFRS adopters, namely, revenue recognition, financial instruments and leases.

Whether and how these areas are applied to FRS 102 remains to be seen, but it will no doubt be a substantial task for the FRC. At least this second stage will not be effective until 2022, though, so there is plenty of time to consult on and consider these changes.

FRED 67 is open for comment until 30 June 2017. Comments on the proposals should be sent to ukfrs@frc.org.uk.

For a copy of the 142-page exposure draft click here FRED 67, Draft amendments to FRS 102 Financial Reporting Standard applicable in the UK and Republic of Ireland, Triennial review 2017.

For more on FRS 102, the proposed changes in FRED 67, and other topics come to our upcoming CPD courses in the Talbot Hotel Stillorgan County Dublin.