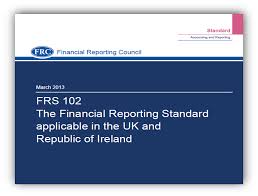 The article examines the more common areas of difference between the existing Irish/UK GAAP i.e. the existing FRSs/SSAPs and UITF (Urgent Issues Task Force) pronouncements and new Irish GAAP. The new Irish/UK GAAP is called FRS 102 and it comes into force for accounting periods commencing on or after 1 January 2015.

Background to the Development of FRS 102

The Financial Reporting Council (FRC), or the Accounting Standards Board (ASB) as they were previously known until July 2012, commenced a project to replace Irish and UK GAAP about ten years ago. This went through various iterations including a version of the IFRS for SMEs which was later transformed into the ‘FRSME’ (FRS for Medium Entities) published in late 2009. However following wide scale feedback from the profession and from users of financial statements, FRS 102 was ‘born’. Copies of the standard are available in the publications section of the FRC website at www.frc.org.uk.

The new FRS was published in March 2013 preceded by two accompanying standards, FRS100 and FRS 101 (both published in November 2012) which also need to be read for a full understanding of the application of the standard. The complete titles of the new standards are:

These three new standards replace the entire suite of FRSs/SSAPs and UITFs for medium/large private entities in the UK and Ireland.

The ‘transition date’ for companies with a December year end, has already passed since 1 January 2014. In fact 2014 will be a busy year for accountants as two sets of financial statements need to be prepared – one set under Irish/UK GAAP`(the last ever using SSAPs and FRS 1 to 30) and another set under FRS 102 which will act as comparatives for the 2015 financial statements.

Small entities and the FRSSE

It was originally intended that ‘small’ entities (i.e. those with turnover of less than €8.8m, gross balance sheet assets less than €4.4m and less than 50 employees) could opt to use the FRSSE (a cut down version of old UK/Irish GAAP).

However, recent developments at EU level (with the announcement of the Micro Entities Directive for companies with turnover less than €700,000, gross balance sheet assets less than €350,000 and less than 10 employees) mean that the FRC are currently re-thinking the whole FRSSE project. While the latest incarnation of the FRSSE is due to apply from 1 January 2015, it now looks like it will be replaced by a version of FRS 102 which some commentators believe may be a type of FRS102 ‘lite’. Only time will tell what the FRC will produce, so watch this space.

This article does not deal fully with the many changes in terminology brought about by the implementation of the new standard, but some of them are listed here:

Because the current Irish GAAP terms are retained in Irish and UK company law, the law trumps FRS 102 and we are unlikely to see many companies change these terms.

The main technical differences with which accountants and their clients will have to come to grips, in the next six to 12 months are set out below.

The single biggest difference between ‘old’ and ‘new’ UK/Irish GAAP is that regarding financial instruments which includes cash, trade debtors and trade creditors. Space does not allow us to go into all the details, but suffice to say that even in a simple company or group, accounting for financial instruments will be more complex than in the past.

Under current Irish GAAP goodwill is dealt with under FRS 10 and purchased intangibles are amortised over their useful life which cannot exceed a maximum period of 20 years, subject to a rebuttable presumption that includes both the demonstrable durability of the business and the feasibility of an annual impairment review.

Under FRS 102, intangibles such as goodwill must be amortised over their useful lives but where the entity cannot make a reliable estimate of the useful life, that period should not exceed 5 years. This will impact entities that have goodwill on their balance sheets and cause amortisation to be accelerated, thus depressing reported reserves.

There is a major difference between the treatment of property revaluations between the existing Irish GAAP standard FRS 19 Deferred Tax and the new FRS 102.

FRS 102 has reintroduced the local standard requirements of FRS 16 ‘Current Tax’ and FRS 19 ‘Deferred Tax’ but has added some additional requirements which will, in certain cases, increase the amount of deferred tax reported on company books.

In effect it means that if a company revalues its property it must provide for deferred tax at the tax rate that is expected to apply when the timing difference reverses. The same applies in a fair value exercise during a business combination, deferred tax must be provided on similar grounds. That is an attempt to bring the new UK/Irish standard fairly close to the ‘temporary difference’ approach taken by the IASB (International Accounting Standards Board) in full IFRS.

As above, this will often cause some positive and negative changes in reported reserves under FRS 102 compared to current Irish GAAP.

This statement is quite different (apart from the change of title) from the Cash Flow Statement in current Irish GAAP, called FRS 1, in that there are only three headings instead of nine. These three headings are – ‘operating’, ‘investing’ and ‘financing’ activities. This means that a number of cash flows will be recorded in different headings by different companies, depending on what choices they make.

For example interest payments, interest receipts and dividend receipts can be recorded under about eight different headings, depending on choice and the standard needs to be referred to for the choices available. Even tax paid has no specific section, although it is expected that most of it will be allocated to ‘operating’ with only capital gains tax being likely to be recorded within the ‘investing’ section.

There is no formal reconciliation of the movement in cash to the movement of net debt as in the current FRS 1 but they should both be reconciled so as to ‘prove’ the statement is correct.

Investment properties are initially recorded at cost under FRS 102. Subsequently if a fair value can be measured without undue cost or effort then, it must be fair valued with any gains and losses being reported within the Income Statement (new title for the Profit and Loss Account).

If a fair value cannot be measured reliably then it is accounted for as a normal item of property, plant and equipment, at cost and subjected to depreciation.

This accounting treatment is different from the current SSAP 19 ‘Accounting for Investment Properties’ in a number of respects.

Under SSAP 19 a reporting entity:

·         must adopt a revaluation model and not charge depreciation; and

·         must record all revaluation gains and losses in reserves and in the Statement of Total Recognised Gains/Losses, not the Profit and Loss Account.

For some entities this will result in potentially greater volatility of future company results as gains/losses on investment property revaluations/devaluations will impact directly on income.

Leases are currently dealt with under SSAP 21. The major difference between SSAP 21 and FRS 102 regarding leasing is in the disclosure requirements.

Under the new FRS, for operating leases, entities must now disclose the total amount of non-cancellable operating lease rentals due right to the end of the contract must be split between the amounts due:

In SSAP 21, only the annual commitments expiring within one year, between two and five years etc. are required to be disclosed.

Under current Irish GAAP, employees’ short term entitlements such as untaken holiday pay, are ignored and rarely accrued.  However under FRS 102 the cost of all employee benefits must be recognised:

·         as a liability after deducting amounts already paid directly to employees; and

·         as an expense, unless the cost can be included within inventories or in the cost of property.

Therefore accruals for employees’ untaken holiday entitlements will need to be accrued, giving rise to a once off reduction in reported profits in the first year of implementation of FRS 102.

These entitlements should be measured at the undiscounted amount of short-term employee benefits expected to be paid in exchange for an employee’s service.

The expected cost of accumulating compensated absences should be recognised when the employees render service and measured at the additional amount the entity expects to pay as a result of the unused entitlement accumulated at the end of the reporting period. These are presented as current liabilities.

Another totally new concept in FRS 102 is that of the ‘functional currency’ – a definition borrowed from full IFRS. This is defined as the currency of the primary economic environment in which an entity operates.

For many Irish private companies it will be obvious that the Euro will be the functional currency of the company but there are a number of subsidiaries of US multi nationals who have had to record their transactions in a foreign currency as their dominant currency is the dollar. Similarly for many UK based entities their functional currency will be Sterling. For these there will be little change from this adjustment to the definition.

For others it will involve considerable judgement in deciding what an entity’s functional currency is. Under SSAP 20 there was no ‘functional currency’ definition, as records had to be kept in the company’s local (geographical) currency.

Current Irish GAAP does not deal with the accounting treatment of specialised activities like agriculture. However, FRS 102 addresses the accounting for biological assets defined as living plants and animals.  The treatment suggested is a choice between the ‘cost’ model and ‘fair value’.

At least in the short term, FRS 102 will create some volatility for most reporting entities.

The sooner accountants and their clients come to grips with the key differences and make sure their financial reporting software and systems are well prepared to cope, the better.

A series of courses is taking place around Ireland, presented by John McCarthy, using journal entries to show how to prepare the first transition adjustments and the first set of FRS 102 financial statements for 2014.  For more details of location and booking options visitwww.jmcc.ie/events.